A trend has developed. First timers at the LRBC are learning, sometimes the hard way, that French Toast Sundays always features one "special" recipe and only one special recipe. This means we change the French Toast offerings often, and we're likely to sell out quickly. We feel badly because we're aware of how many of you we've disappointed since the Portland Monthly article came out, those of you who made the trek out in search of "the Elvis" only to arrive and learn we only offer one type of French Toast at a time, and that no, today's isn't the Elvis. But there was Monte Cristo French Toast with orange poppy seed butter and Oregon strawberry pinot-noir jam, and Log Cabin French Toast with sausage links, maple butter, and fried sage, and Blood-Orange-Hazelnut French Toast with blood-orange marmalade, candied hazelnuts and salted caramel butter, and there was Orange Cardamom French Toast with dark chocolate drizzle. But no, there was no Elvis. But that doesn't mean there won't be in the future. Sadly, the truth is that if you don't like any of the above offerings then today, and last Sunday and the Sunday before that and so on, just wasn't your day.

Given that the recipe changes week to week, it may not be consistently special to you all the time, but we assure you that it is special to someone somewhere. Last Sunday's recipe was special for a different reason, being that it was dedicated to my grandfather, who passed the previous week. 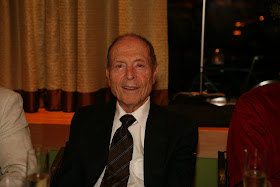 Peeps (a derivative of Peepa, as he was often called by close family), led a long and happy life, and took great pleasure in reminding both himself and others of that very fact (in his later years often doing so twice in the same conversation). A son, brother, husband, father, grandfather, great grandfather, businessman, gardener, poet, artist, athlete, and Jim Beam appreciator.

Among his favorite foods there was one particular item that seemed to remain a constant that throughout all his life, or at least as long as anyone knows for certain. At any given time if one were to open my grandfather's freezer, you could count on discovering at least a few pints of Häagen-Dazs Rum Raisin ice cream. A well known fact amongst the entire family, so many pints were emptied throughout the years that my grandparents were able to accrue an entire designer line of makeshift Häagen-Dazs Tupperware containers used for storing leftovers. In doing so, they were able to stock their refrigerator and freezer much like a commercial kitchen; entirely uniform stacking storage containers. It wouldn't be a stretch to say that it was my grandfather who first inspired me to enter the food business. 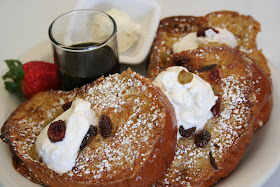 Stuart’s Rum Raisin French Toast
cinnamon-orange challah french toast topped with tart raisins and cranberries, served with cinnamon whipped cream, vanilla bean butter, and jamaican rum maple syrup
Some tricks up her sleeve?
*To plump them up, she soaked both the golden and Thompson raisins in Myer's Rum and soaked cranberries in Cointreau overnight before topping the French Toast
*Zesting an entire orange into the batter, along with adding organic orange juice really punches up the flavor of the batter and compliments the cinnamon, alcohol, and maple flavors.
*Make your own vanilla-bean butter at home: combine the seeds of two vanilla bean pods and 1/2 lb. of softened unsalted butter in a food processor, blend until smooth. Spread on homemade hot-outta-the-oven muffins, molasses bread, or white toast

Ali and I both know that without the support of my grandfather the Little Red Bike Cafe would likely not exist. In fact, it was a fateful conversation in the garage of his home that we decided upon the name, "Little Red Bike Cafe." For that and many other reasons we are forever grateful for the time we spent with Peeps and for the wisdom he so generously liked to bestow upon those around him. Thanks, Peeps. You will be missed.
Ali and Evan at 4:38 PM