Happiness is a Warm Waffle 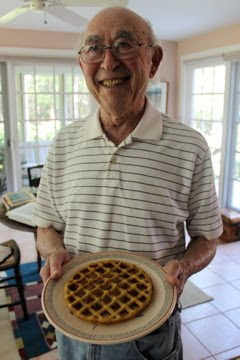 At 93 years young this amazing man has had more life experiences than HBO could capture in one of their award-winning original dramas. A life that began gathering chicken eggs on a rural farm later thrust him into the "Roaring Twenties," the Great Depression, WWII, the Cold War, Watergate, the Vietnam War, and numerous recessions; this isn't some sort of brief history of the 20th century. For Grandpa Morton, this is his life. One might think that after nearly one hundred years on planet earth, a person would develop some sort of "been there, done that, I've seen all there is to see" sort of attitude towards living. But spend just a few minutes with this man and you'll feel humbled to be in the presence of such knowledge. He resonates optimism similar to the way our sun continuously exudes that life giving force we call energy. A day's worth of contact, and one feels as though she could write a self-help book based on the pearls of wisdom he regularly peppers into a conversation. When he speaks, I can't help but feel like I am a resident squirrel in a public park, waiting for this kind man to offer up another nut that I can cherish and protect, and eventually devour in effort to help me survive a bitter cold that lay ahead.

During our recent visit, Grandpa Morton decided that he wanted to make us waffles for Sunday brunch. I marveled thinking about the countless waffles this man must have made throughout his lifetime. Surely he mastered his waffle technique many years ago, after a great deal of trial and error. I pictured him sitting at the breakfast table, a man growing older and the world around him rapidly changing, all the while the table setting and the waffle remaining constant. When Sunday morning arrived we all staggered from our respective beds, and grandpa made us waffles, one by one. As he hovered over the waffle iron for what seemed like an hour, a single waffle sat proudly on the counter next to him. This was the day's first waffle, and it was to be grandpa's waffle, but he politely refused to eat it until the rest of us had been served. As time rolled by, the waffle began to lose its crispness, but grandpa didn't seem to care.

It wasn't until it was his turn to eat that grandpa casually mentioned that this was the first waffle he had ever made by himself. Upon hearing this fact I went into a state of shock. Bewildered, I snapped the above photo in effort to try to capture the moment. Ninety-three years old and this man was still attaining new life experiences.

After we all finished breakfast and began to clear dished from the table, I asked grandpa what he had thought of his very first homemade waffle:

"It was alright," he replied.

"Yes. It was okay. Perhaps I'll try making another one in ten years." The tone of his voice implied not the slightest bit of sarcasm or hesitation. On the contrary, the conviction of the comment assured me he will make that next waffle, even if it takes him another ten years to do so. Sharing in this moment made me feel as though I had stumbled upon a pot of gold. Perhaps it is his intention, his unwavering will to keep on going, that has guided grandpa and allowed him to live such a long and illustrious life.

It wasn't just breakfast that grandpa bestowed upon us all this past Sunday. Once again, he effortlessly turned a routine exercise into a valuable lesson. No matter what kind of curve ball life throws our way, we mustn't hesitate to continue to dust ourselves off, adjust our grip, and step back up to the plate. Who knows what kind of delicious challenges tomorrow will bring?
Ali and Evan at 6:55 AM 3 comments:

Taking a Bite Out of Life 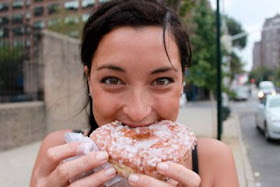 Does Ali enjoy NYC's Doughnut Plant? Hmm...she might need one more bite, just to make sure.
No, we haven't fallen off the face of the earth.

And though it may sadden many of you to read this, we are not yet waist deep in bringing you LRBC version 2.0.

The truth is we're on vacation.

Not your run-of-the-mill, weekend getaway, tent camping on the river kind of vacation. This is a full-scale, pack your bags, don't forget to put a hold on our mail kind of trip. We're referring to it as a research culinary tour; twenty days of exploring, eating and digesting the world around us. Rest assured that we're loving every minute of it, refusing to take a single nanosecond for granted.

We do apologize for our lack of contact. And given our forthcoming schedule, one should expect at least a couple more weeks of sporadic (at best) blog contact. Please know that we miss you, and we think of you often. As the saying goes, "we wish you were here," and we appreciate the kind sentiments you continue to share with us. We can't thank you enough for the many in depth emails, comments, and advice you all have offered ever since our disclosure that we've been bitten by the book-writing bug. We look forward to our return home, and the chance to share with you the inspiration we've accumulated during our most recent journey.

Until that time comes, be sure to get out and make the most of what mid-summer has to offer. From what we can tell, this season's donuts are just entering their peak ripeness. Happy picking.
Ali and Evan at 4:40 PM 3 comments:
‹
›
Home
View web version