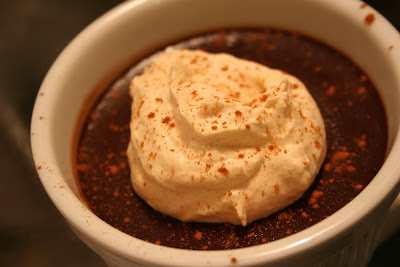 batch #28
Yeah, I said it and I mean it. We've got The Best Chocolate Pudding. But we've earned the title. For the last few months we've been experimenting with different cooking methods and more importantly different chocolates on the quest to bring you the best chocolate pudding in town. Consider us our own America's Test Kitchen (how I love thee Christopher Kimball, let me count the ways) This ain't yo cup o' puddin', snack-pack, J-E-L-L-Olsh*t either. We've tried and tested them all. From whole and coconut milk to half-n-half and sour cream. From dark chocolate and whipped egg yolks to corn starch and arrowroot powder elixirs. Finally, after months of soul-searching and chocolate fetish feeding, we've surfaced from this frenzy with a recipe. Let me re-phrase that; not just a recipe, the recipe. Through a delicate blend of Scharffen Berger's semi-sweet dark chocolate and unprocessed dutch cocoa powder (amongst other ultimate top-secret mastered ingredients and techniques), we think we've hit the nail on the head. My goal is to eventually make the chocolate pudding a permanent feature on the menu and serve it with flavored whipped creams.
Just as I've been infusing butter for LRBC's Sunday Challah French Toast, I've been playing around with flavored concoctions made with real organic cream. So far we've whipped up almond, banana, peppermint, and fresh blackberry. Me personally? I like mine with whipped pumpkin cream and cinnamon (see batch #28, featured). But for now the pudding must remain a special and you'll just have to come in and see for yourself.
Ali and Evan at 7:38 PM