Fresh Chalk and Other Happenings 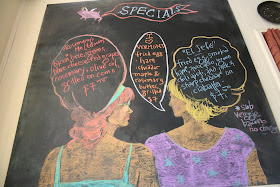 Marly did it again this past Friday. The creativity of her piece as well as the popularity of the "specials" caused us to hold over the "El Jefe" as well as "Rosemary's Meltdown" for the current week. Beehives went out of style years ago, but we're starting to get the feeling that egg, cheddar, ham, avocado, and green chili aioli might be in fashion for some time to come. 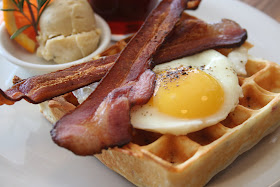 Ray's Saturday shift meal
(looks as though the bacon got overcooked...sorry Ray)

Also, waffles were served this past Saturday, which was a first for the LRBC. We called the special "Pigs in a Quilt," and tried a new batter recipe, into which we folded bacon crumbles. The waffle was served with a fried egg, two slices of bacon, whipped rosemary-maple butter and real maple syrup. We definitely learned a few things, one of which being that it might be difficult to spread butter on a waffle that is topped with an egg and bacon. Next time we'll try melting the butter and drizzling it over the waffle prior to serving it. Thanks to all of our test dummies for helping us learn about the magic of waffles. It's only going to get better.
Ali and Evan at 9:13 AM