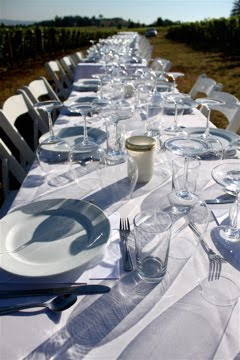 Delane was the first to get in touch, leaving a message on my home machine asking if I wanted to help out in the re-launch of the Plate and Pitchfork season. But really Delane found out through an email from her sister Memry, that was originally a forward from Erika Polmar, the creator of the aforementioned and insanely popular farm-to-table dinner series, that some extra hands were needed for a private event. It truly was a fantastic game of communication tag, which produced fabulous results. After a few more conversations a plan was set forth. Come Monday Delane, Memry, and I would pack into the car and head to Dundee, Oregon to help the people behind Plate and Pitchfork put on a private party. And boy, do these guys know how to throw a party.

While not technically a Plate and Pitchfork dinner, the event gave the P&P team a perfect opportunity to get creative with one of their favorite chefs before the official start of the Plate and Pitchfork dinner season. Eighty-one guests dined alfresco and family-style, nestled between rows of grapes on the hills of the Domaine Drouhin Vineyard, a property which contains arguably the most spectacular mountain and valley views of any vineyard in the Willamette Valley. The dinner was prepared by Chef Benjamin Bettinger from Beaker & Flask. He's the man you see pictured below, deboning a fillet of Chinook salmon. Please notice the adorable sprig of lavender behind the ear. I ask you to take note not because it's an undeniably cute touch to Ben's whole "hey look at me, I'm cooking outdoors" shtick, but more so because it speaks directly to Ben's friendly, approachable, and easy-going nature. He was completely at ease throughout the entire evening, and I couldn't help but notice that the more time I spent around him, the more inclined I felt to call him "Benny," just like the rest of his brigade. 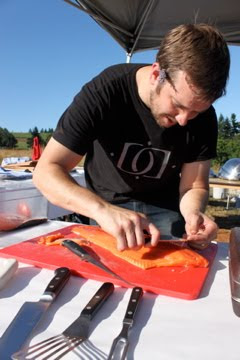 Chef Ben Bettinger of Beaker and Flask
In terms of ego, Ben is not a "big personality" chef; however Ben is a big personality when it comes to heart. His passion for food is evident, but he oozes a sense of cool and charm while directing the show, never one to keep himself from getting lost in the moment, or from laughing at a joke. It was a pleasure to watch him work, and I now understand why so many are not only smitten with "Benny's" food, but with the man himself. 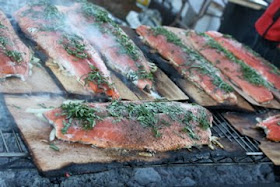 As previously mentioned, the dinner was presented by Plate & Pitchfork. Everything I once suspected about this organization I can now confirm is true. P&P was created eight years ago by a woman who is as passionate about good food as she is about ecological sustainability. Aside from teaming up with local farms, chefs, and winemakers, a portion of the proceeds from the farm dinners have always been given back to supporting organizations doing good in the community, particularly those supporting small farms, environmental literacy and food security. Erika and her team, including the resilient Hannah Treuhaft, literally make magic happen in these fields every summer, and I feel damn lucky to have been able to peek behind the scenes to see how it all goes down.

Before we arrived, a long row of tables were set and dressed in crisp white linens, perfectly poised plates and silverware, and finished with mason-jar candle holders and plenty of stemware. For this particular party there were three pours of wine per course from some of the area's best and most interesting winemakers, specifically Brooks, Domaine Drouhin, and Montinore. The setting could not have been more perfect, and the weather was cooperating, providing us with clear views of the mountain and valley for miles. The end result was one fabulous evening. This evening, in this setting, paired with the food and staff, showcased what we're all about in the Pacific Northwest. I found it to be an incredible tribute to our local area, and I felt proud as I listened to the out-of-town guests express a loss of words over what they were experiencing. Needless to say, Oregon made a very fine impression on this particular group, who hailed from all across the country including Texas, South Carolina, and New Jersey. 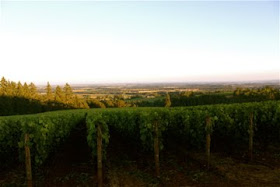 The menu was impressive, especially when you consider everything is being finished, plated, and served outdoors. I have now eaten Ben Bettinger's food both indoors and outdoors and I'll be damned if one can tell a difference between the two as far as quality is concerned. Here's what was served, and what leftovers we staff later devoured: 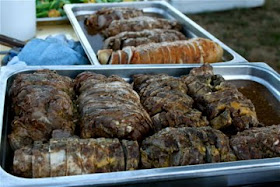 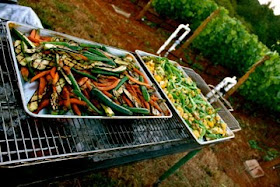 The service went very smooth and graceful, especially from the perspective of the diners, which is all that really ever matters. Our personal interaction with the diners was casual but genuine, with a focus on quality and attentiveness. Once the diners left it was up to the kitchen staff to clean-up their section, and then the P&P team really went in to action. Do not let me glamorize this job for you. The Plate and Pitchfork crew works hard for their money. Clearing tables, gathering linens, sorting rentals from private property, breaking down and loading tables and a mobile kitchen, including a bus station where the "dishwasher" consists of a couple of bus tubs and water jugs, is not easy work. Let alone doing it in the dark, using headlights, lanterns, stars, and the glow of the moon as your only sources of light. I'm letting you in on this part of the evening to let you know that there is an incredible amount of thought and effort that goes into producing such an elaborate event outdoors, and both as a professional in the food industry and someone who cares deeply about the world I'm living in, I deeply admire all that Erika and her team do. Whether you are able to attend a Plate and Pitchfork event as a guest (if you can manage to get a ticket before they sell out!) or as a volunteer, you can feel good about supporting this group of dedicated individuals. Their mission is to promote sustainability, create change, and fill your belly at the same time. What's not to love? Oh, and I should mention that they're also really funny, down-to-earth, and have really good taste in food and wine.

Fortunately for me the evening's good food didn't have to end after we left the vineyard. You see, there were so many leftovers from the night's festivities that I was "forced" to take food home with me. Truth be told I couldn't wait to share the deliciousness with Evan because I knew he'd love to utilize my haul for breakfast. In the morning, in true LRBC fashion, we made this meal our own by topping it with a fried egg. 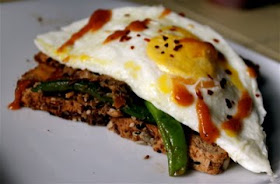 Roasted Lamb and Summer Vegetable Hash
with fried egg, seeded toast, and roasted tomato ailoi
(finish w/ Aardvark, if you're in our house)

Yeah, it was pretty wild to be feasting on lamb so early in the morning, a decadence that I think we'll rarely top. Many thanks to my girls Delane and Memry, who always make the trip worth it, and to Plate and Pitchfork, Chef Ben Bettinger and his staff, and the generous people at Brooks, Domaine Drouhin, and Montinore. It was an honor to be in your company on such a fine summer evening. I know I won't be forgetting about this one any time soon.
Ali and Evan at 12:20 PM