June 21st 2010 was the first day of summer. We closed the doors to Little Red Bike Cafe the very next day. Even without a cafe to cook in, or maybe because of it, we were determined to make this summer all about food. I suppose it was an easy cure for our breakup with the cafe. In times of crisis the tendency is to return to the familiar. We sought refuge in flavors, waiting for the day when it felt safe enough to dream about our future again. Given that today is the last day of summer, and represents the figurative conclusion of this culinary exploration, I thought it would be a good idea to recap some of our favorites from the journey. The following list is composed of the most legendary/inspiring/delicious things we've put past our lips over the past 103 days. 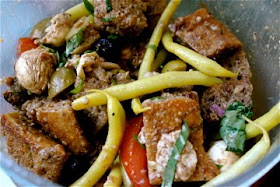 #1
Picnic Panzanella
Homemade, Portland, OR
This salad was made in the morning, in a tiny yellow kitchen in North Portland, and was later biked to a romantic picnic for two on the Skidmore Bluffs. The salad contained: toasted multi-grain pan de tomate*, fresh tomatoes, green olives, wax beans, fresh mozzarella, shallots, Kalamata olives, and basil, and was tossed with a red wine vinaigrette. It was paired with a bottle of rosé and Blitzen Trapper, on a warm sunny day around 4:30 in the afternoon. 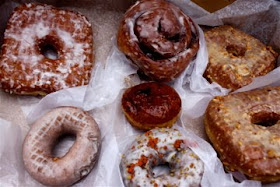 #2
Peanut Butter and Jelly Doughnut (featured top right and lower corner)
Doughnut Plant, NYC
Quite possibly the best doughnuts we've ever come across, the peanut butter and jelly was the stand-out in the bunch. The outside of the raised doughnut has a peanut butter glaze studded with crushed peanuts. The doughnut itself is rich while remaining airy, and inside awaits a homemade blackberry jam. So good we ordered two. 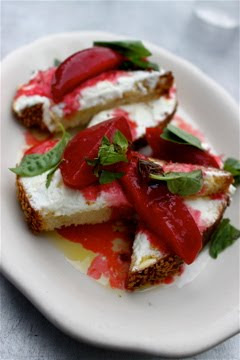 #3
Plum, Goat Cheese, and Basil Sesame Toast
Marlow & Sons, NYC
Beets and goat cheese. Goat cheese and beets. By now we are all too familiar with the pairing, which is featured on just about every other restaurant's salad menu. When we came across this variation in Brooklyn, our taste buds exploded into cartwheels upon recognition that we were in fact eating juicy plums drizzled in olive oil instead of your typical roasted beet. The combination was major in every way; sweet, tart, tangy, earthy, and nutty. An instant summer classic, and something that made our hard-on for the whole Firth and Tarlow empire, well, that much harder. 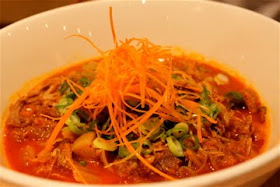 #4
Kimchi Stew
Momofuku Noodle Bar, NYC
Evan said he could eat this spicy pork stew every day for the rest of his life. It was served with a bowl of steamed white rice on the side. Lucky for us Chang's recipe for this one, along with several other favorites, is in Momofuku’s (a-mazing) cookbook. 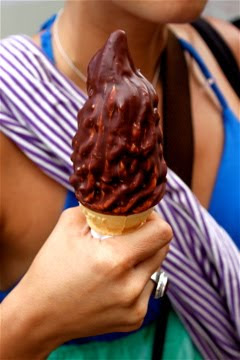 #5
Salty Pimp
Big Gay Ice Cream Truck, NYC
Vanilla ice cream, dulce de leche, sea salt, chocolate dip. As a dipped cone connoisseur, I would definitely have to put this one at the top of my list. 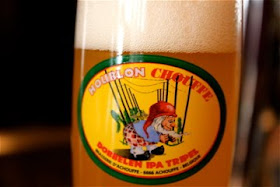 #6
Houblon Chouffe Dobbelen IPA Tripel
Het Melkwoud, Haarlem, Netherlands
There is nothing like drinking European beer on tap, close to the source. Brasserie d'Achouffe or "Chouffe", is a small artisanal brewery in The Ardennes Mountains of Achouffe, Belgium. According to Chouffe the blend is "a unique marriage between the English tradition of IPAs, the American new revolution of Imperial IPAs and the classic Belgian way of brewing." Not as hoppy as a traditional IPA but a bit more bitter than a traditional tripel, the balance of flavors in Houblon Chouffe easily masks the 9% alcohol content. When we got to sample this amzing beer on draft at Het Melkwoud in Haarlem, Evan and I agreed that this is one deliciously dangerous beer. (As in you could probably drink four or five without blinking an eyelash-just before falling off your bar-stool.) 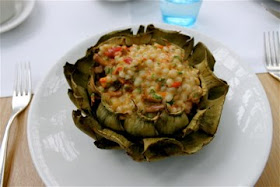 #7
Artichoke Risotto
De Kas, Amsterdam, Netherlands
The best way to describe eating at De Kas is to say it is like eating in a museum. Everything is that beautiful. Aside from the greenhouse that encompasses the actual dining room, bar and kitchen, there are greenhouses and gardens throughout the property, where Mediterranean vegetables, herbs and edible flowers are grown on site. The restaurant also owns land 10 kilometers from Amsterdam in the Purmer Polder, where seasonable vegetables are grown outdoors throughout the year. The restaurant's ever-changing fixed menu is based on what was harvested that day, and is supplemented with fresh ingredients purchased from local farms around the vicinity of Amsterdam. Served as a vegetarian lunch entree, the sweet leaves of the artichoke provided the perfect bowl for this creamy risotto made with Israeli cous-cous, red peppers, and shitake mushrooms. 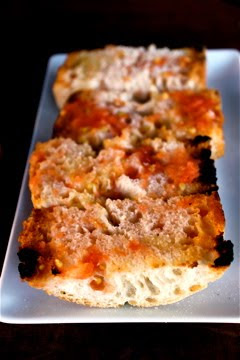 #8
*Pan de Tomate
Any cafe, Barcelona, Spain
In little bars and cafes throughout Spain you can easily find pan con tomate on the menu- grilled bread brushed with olive oil and topped with grated fresh tomato. Might sound silly but we had no idea something so simple could taste so good- or be so addictive. We have been recreating this dish ever since we got back from Spain, testing out grilled bread vs. toasted, and baguettes vs. whole grain loaves. The real key to this dish is the grated tomato. As in, please use a box (cheese) grater to grate the tomatoes. First, brush the (toasted) bread in olive oil. Spoon the fresh tomato on top. Drizzle with more olive oil. Top with coarse sea salt and freshly cracked pepper. Warning: May become habit forming. 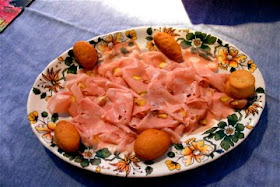 #9
Mortadella
Las Dos Lunas, Ibiza, Spain
I cannot think of a single thing we didn't like about Las Dos Lunas. We spent the night falling in love and going gaga; finding everything about the ambiance and food heart-clenching. "Smitten" would be an understatement. It didn't hurt that upon our arrival we were presented with a beautiful plate of mortadella and biscuits, thinly sliced and flecked with pistachios. So simple yet delicate and flavorful, this welcome plate of antipasti was life changing. I can only imagine what it would have happened if the bologna in the mayo and white bread sandwiches of my youth was swapped out for this mortadella. I may have grown up a different person. (Seriously.) 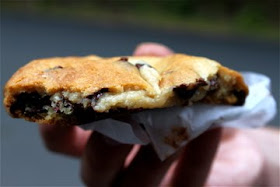 #10
Warm Chocolate Chip Cookies
Waves of Grain Bakery, Cannon Beach, OR
We cannot stress this fact enough: if you are out on the Oregon Coast do yourself a favor and stop in at Waves of Grain Bakery in Tolovana Wayside. Housed in an adorable little cottage located one block from the beach, the bakery is notorious for pumping out pure, tangible goodness. We spent this summer trying to make day-trips to the beach (and WOG) a habit, and notoriously spent the hour and a half drive west pondering what goodies our friends had in store for us. Usually we're suckers for WOG's Praline Pecan and Ginger Molasses cookies, but during our most recent visit Jason and Hilary gifted us two chocolate chip cookies, still warm from the oven. While the outside had developed a nice crust, the inside was still gooey and doughy. This took the chocolate chip cookie to another level.

So, what about you? What dishes blew your mind this summer?
Ali and Evan at 10:06 AM