Ode to the Patty Melt

I have consumed more ground beef in the past eight weeks than in the past eight years. The patty melt sandwich is to blame. Are you familiar with the patty melt? No need to be embarrassed if you aren't. Prior to my own recent investigations, if someone were to ask me what comprised this American classic I would only be able to get as far as hamburger, bread and cheese.

True, those are the nuts and bolts of a patty melt but only now can I understand and appreciate the details. Let's break it down: A traditional patty melt consists of a well-seasoned ground beef patty, Swiss cheese and grilled onions, grilled (not toasted) on rye. We've been making a lot of these sandwiches recently all in the name of recipe testing. Around our house, homemade Thousand Island dressing is the go-to spread that really "ties the room together." After several attempts at tweaking the traditional recipe and trying to think of a way to make this classic even better, we kept returning to the original. It is times like these when we are forced to give in to simplicity and recognize the inherent greatness of a timeless combination. Stick to these key components and you'll be able to recreate your own personal griddled bliss. 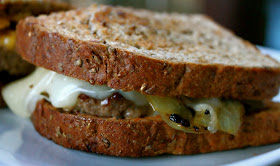 Seriously, go ahead and make one for yourself to see just what I am getting at. Better yet, we'll cook one up for you in just a few weeks. Stay tuned.
Ali and Evan at 7:22 PM