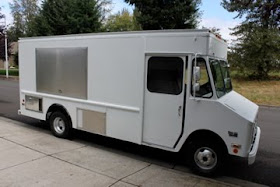 I can almost taste it now.
Last Monday we passed our pre-opening inspection from the Multnomah County Department of Environmental Health and have subsequently been deemed "ready to open." The only thing keeping us from cooking is that our good friends, whom we hoped would be able to host us during the launch of the new food truck business, have yet to receive the official go-ahead order from higher up (I'm not talking about the Lord with a capital "L," but the almighty land-lord, whose word is legally mightier than those of God).
When looking at the kitchen above, please note the wheels. There are six of them in total: two wheels up front, and four in the back. If you're lucky (and willing to fork over the appropriate amount of dough), you may be able to have your name engraved into one of the truck's many lug nuts during a forthcoming fundraising campaign.* Currently, we are gearing up towards putting those wheels to use and trying to find a temporary location for the truck to begin operating. When and where that will take place has yet to be decided.
The transition from a brick and mortar cafe into a new food truck business has not been easy. There have been many bumps and taxing experiences shelled out along the way, which is really a euphemism translating to: we've spent a lot more cash than we had originally anticipated would take to get us this far. The other day it dawned on me that our launch will coincide with a time of year when most mobile food units are operating on reduced hours, if they haven't already shuttered for the winter. But as I've stated before, I'm just eager to cook, and getting open remains my only goal.
Much of the work that we have done to the truck has stemmed from my initial desire to make the truck easy to operate in most locations. At the time of purchase the truck was wired to run off a gasoline generator to power its 12V appliances, such as the exhaust fans, overhead lights and water pump. Having never been a big fan of the noise and smell that accompanies most generators, I sought the aid of my father-in-law and his close friend to help me rewire the truck so that it could be plugged in to a standard 110V outlet. Additional (unexpected) work on the truck has included replacing the starter, battery, rewiring the cabin lights and adding extra fixtures, rewiring the battery, installing a battery disconnect or isolator, re-routing the kitchen gas line and replacing a loose fan belt. Keep in mind all this work was completed after the truck received a passing grade from a local mechanic during a pre-purchase inspection. Replacing the alternator is next on the to-do list. This last little tidbit I discovered on my way home one night, when the headlights on the truck went out and I feared the engine would soon follow suit.
Welcome to the world of mobile food unit ownership. I now know that in effort to maintain a truly mobile kitchen, auto maintenance will at times cost the same as a small waitstaff. Though they cost a fraction as much to start as a small restaurant, they aren't by any means easy to get off the ground. Still, we've labored to get to this place, and thanks to the help and support of family and friends, here we are. Ready to open, literally, just as soon as we nail down that oh so important location.
Suffice to say, we'll let you know how it all works out.
* More on the Kickstarter campaign in time. We're teaming up with some talented friends who are committed to seeing this thing through, and whom we are dearly indebted to for their unwavering support.
Ali and Evan at 6:05 PM